The last few weeks have been same-ol’ same-ol’ for the most part.

CJ and I have almost no social life right now, because of the work she’s having to do with the Exchequer’s office (for the SCA). She comes home from work and has to work on the “domesday report” … weekends, if we’re not actually at an event, we are usually at home, while she works on … the domesday report (or other aspects of the office).

Sigh. A couple weeks ago we had dinner at a friend’s house, but partly so she could help with … an exchequer report. Today we actually get to go to a party that only has to do with the SCA because most of our friends are in the SCA — it’s a friend’s birthday party.

Next weekend is Crown … at least we’ll get to see friends there, although CJ is going to be doing Exchequer stuff, so … yipee?

In a few more weeks, the SCA’s exchequer (or deputy) is coming to our house to audit the Kingdom stuff. Yiee. She’s staying here Friday and leaving in the evening Saturday (second weekend of April).

At school, well, week 8 is done out of 11. We’re coming down to the panic point for students, including dealing with the usual “waited too long” stuff for those who aren’t passing … (procrastination, no paying attention to their grades … etc.).

Work has been weird, because on T/TR my first (and only) class is at 1. That means spending time working on preparing assignments, and such, but I’ve also been watching on “Amazon Prime”, the series “Eureka”. I watch it some at home, catch a few episodes int he morning, go do my Office Hours, then teach my class, and come home. Mondays and Wednesdays, four classes, scattered across the day — starting at 8:45am, and ending at 7:50pm. LOONG day. But that’s how it works sometimes.

And … my right hand has been giving me some pain (to the point that it hurts to shake hands sometimes, and various other issues). Last Friday (the 13th) I went in to see the doctor. I had xrays and five vials of blood taken for tests. After a week I contacted my doctor and asked for a diagnosis. Some of my friends recommended “Mega Red”, which is a fish oil made mostly from krill, so I asked the doctor about that as well. What gets me is that I had to ask for a diagnosis. I kind of assumed that since I went in, saw the doctor, had tests done, etc., I would get one without having to ask.

“The xray shows osteoarthritis, or wear and tear type arthritis. There is no cure for this; it is a consequence of aging. Anti-inflammatories can be helpful to control symptoms as needed. … I cannot endorse Mega Red, no.”

Well, as “consequences of aging” go, it could be worse. The way I see it, use ibuprofin or some anti-inflammatory if needed, and not worry about it the rest of the time. A small amount of pain I can deal with, it’s when it really hurts that I would need the meds. As long as it doesn’t get worse …

CJ and I had our anniversary (21 years!) trip to Disneyland a couple of weekends ago. That was fun, although I think we both maxed out on crowds a lot earlier than the last few years. I think with the economy picking up, that there are not going to be as many weekends with the smaller crowds we were enjoying for awhile there. Oh well.

We did finally get to go on the ride in the Cars theme area — the racers. That was pretty good. 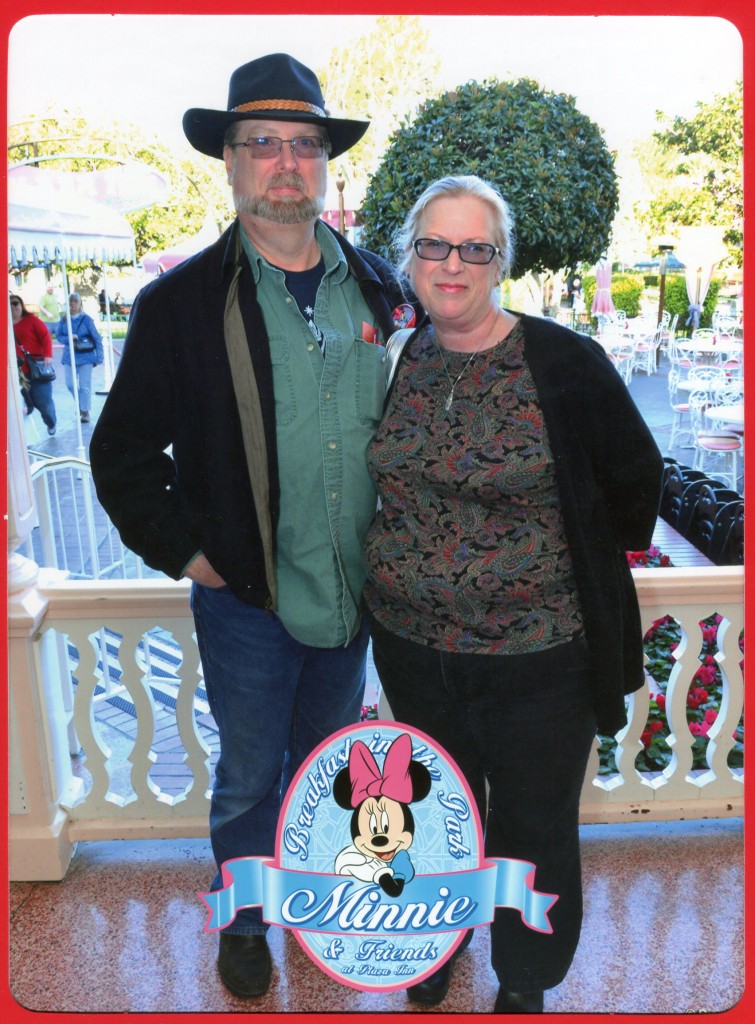 On other fronts, well … school has been school. Lots of problem-students. Sigh.

And it appears I may be coming down with arthritis in my hands. The big issue is in my right hand, the thumb joint with the hand gets really painful sometimes, gripping things (even a toothbrush) can be hard. The rest of my hands aren’t bad, but the joints all hurt a little when it acts up. I went in for tests yesterday (five vials of blood, something like 9 xrays). Oy. We’ll see …

CJ is being wiped out by the SCA Exchequer job. We have very little social life outside of an occasional SCA event. I can’t wait until she can give up the job (June of 2016 is the plan). Sheesh.

Not much else going on. Busy with all the usual things. A little coding here and there, school, keeping things up-to-date on various sites … (except this one, have been pretty bad about that part).

Have been enjoying watching some shows from the SyFy channel on Amazon Prime (watched four seasons of Warehouse 13, and am watching Eureka … both of them sort of linked, but only vaguely (references in Warehouse 13 to Eureka).