Sh*t. Just … crap. Today I picked up Zootie’s ashes. Somehow it feels more final than the day we took him in, which is odd. I stood there and was petting him as they administered the medications to put him down, but holding the box with his ashes really hit home. I’ve had tears at the edges of my eyes since I picked the box up. Damn. I feel like crap now.

I wasn’t feeling all that great when I got up, slept weird, I guess. But now I can’t seem to stop crying … at least a little. It’s not like I’m debilitated by grief, but I wipe away the tears, and a few more start … dammit. I’ll be okay, I guess I just need to let the grief out, but geez. I have things to do … walking down the street with tears in my eyes won’t do.

Part of me says “they’re just cats” … but seriously … they were part of the family. Hell, they were our kids or the closest thing to it, since CJ and I had both (before we met each other) decided not to have children. It was tough when Rebo got put down three weeks ago. But we still had Zootie. Then in the last week his health started to go, and … now the house feels empty.

I know people have similar reactions with pets that have passed, or more with human family members who are no longer there. But I’ve noticed that:

Sixteen years (more, really … they were with us for close to 16 and a half, and were close to six months old when we got them, so I am guessing they were closer to 17 years old when we had to have them put to sleep) is a long time for a cat to live. I have heard of cats living longer. At the vet when we were waiting for Zootie to be brought back in to the room where he was eventually put to sleep, someone had given the place a collage of photos of a cat, and from reading the dates he only lived 10 years. So I guess ours had a long life. Looking back it feels like they were always there, although I can still remember coming home and meeting them for the first time, and bonding with Zootie fairly quickly. We hope they both had good lives. We tried.

Shit. One friend who works with a shelter offered to start sending photos of cats he’s trying to place in homes. I had to tell him it was going to take some time …We aren’t likely to get new cats for awhile. We most likely will eventually get a couple of cats. But …

Yesterday after coming home with the empty cat carrier, and just slumping in my chair for a bit, I got up and cleaned the cat dishes, the water dish, the cat box … put things away. I found the toys they weren’t playing with, and put them into a bag with the food. CJ found all the meds and medical sharps (we need to dispose of those properly) from Zootie’s insulin shots. Most of it is in the garage. The cat tree by the bed is still there because that’s going to take some work to muscle down stairs, and then what do I do with it? CJ has left Zootie’s towels in front of the TV, because she can’t bear to put them somewhere yet.

I never thought the impact would be this bad. I have not had pets live this long in my care. I am surprised at how deeply it is affecting me. I’ve cried a little over Zootie’s death, but I don’t think I’ve really let go yet. It was hard to be petting him while the vet gave him the shots that put him to sleep. I am glad I was there for him, but it was not an experience I enjoyed. I’m not sure what it will take for me to let it out. It’s hard, I will say that. I get a little teary eyed when I look at photos posted over on Facebook. But I haven’t really processed it.

This post is an attempt to get some of the thoughts running around my head out. I know very few people will read it. That’s okay. I posted on Facebook after we came back from the vet yesterday and have received lots of condolences, virtual hugs, etc. It does help. But I also need to just get some of this shit out of my head. I don’t want to be sad at work, I don’t want to take things out on someone over something stupid that has nothing to do with whatever, but is me just still upset about my cat.

I’ve tried to watch a mix of humorous and serious movies, partly to get my brain out of the funk. I will get there. I’ve tried to focus on projects a bit, but not gotten very far or deeply into them. Time. It just takes time.

“It has been said that time heals all wounds. The truth is that time does not heal anything. It merely passes. It is what we do during the passing of time that helps or hinders the healing process.” – Jay Marshall

Be kind to your friends, family, pets. Remember that your time, as well as theirs, is limited, and enjoy what time you have with them. Make it as positive as you can. Be grateful that they are there, even on the bad days. With it now being November, Thanksgiving is coming. Try to be thankful for them. That’s the most wisdom I think I can muster for now.

It being Sunday night, I have classes tomorrow, although they won’t be too strenuous (one class is a large quiz, another a shorter, followed by some lecture, but it’s basic “Internet” stuff). Good thing … it’ll pick up more on Tuesday. Time to try for some sleep. Now that I’ve written some of this down, maybe it won’t float around in my head keeping me awake at night.

The last week Zootie, Rebo’s brother (littermates) has been deteriorating. We actually expected to lose him first. In the last few days his breathing has become super labored (breathing very heavy, panting, just walking across the room is an exertion …). We took him to the vet yesterday, they tried to drain some fluid from his lungs, but could not find any pockets of fluid.

This morning when I went to go feed him he lay down while I prepared the food, and did not come to the food for his breakfast. I had to take him to the food.

I fear this is it. We’re going to take him in and have him put to sleep today. I feel horrible. He’s been my cat for over 16 years, bonded to me more than CJ. He has no issues with CJ, but he was definitely my cat, like Rebo was really her cat.

Two cats in three weeks. Sigh. Very rough month. I have been asked if we will get new cats, and all I can say now is “probably”. But it’s not going to happen right away. We need to let the wounds heal a bit. 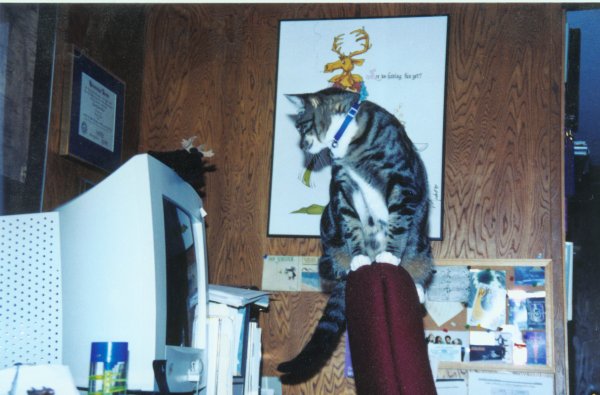