Losing Rebo, and now watching his tired old brother and thinking that it’s not likely Zootie will be around much longer has started me thinking about mortality. I have lost people over the years, and will lose more. Somewhere in there it will be over for me. I’m not thinking quite that far into the future, but still … it’s a bit odd. I don’t feel like I’m 57 … oh well.

Mostly I’m concerned about Zootie right now. Watching him walk/stagger (he’s having problems with his rear leg that come and go, I think it’s the arthritis, but it may also be some nerve damage, hard to say, and he can’t …), watching him breath hard after anything resembling exertion (sometimes just walking from one end of the house to the other) … I fear he doesn’t have too much more in him. It’s sad. He’s been the sweetest cat. I have a feeling that when we let him go, we aren’t going to be interested in more cats for awhile. I think we will need some grieving time and time to adjust.

I’m now starting to think about the human side of things, too. CJ and I probably ought to start working on wills, and putting things in such an order that we can find all the important records, accounts, etc. Sigh. More things to do … but these are important. Bleah.

Well, CJ has to work this weekend, between SCA/Exchequer and her actual paying job, so we’re not doing much. I have classes starting on Monday, so a lot of work to still do, although I’m mostly ready, there’s always more. Time to dive in, I guess.

Rebo is gone, nothing can be done there. However, now I’m worried about his brother, Zootie. He was upset, but was starting to get better (the fact that I’m home this week has hopefully helped a little). However, he’s having problems with one of his back legs. Sometimes when he gets up to walk the leg completely fails him, and he collapses.

This has to be difficult for him, but he doesn’t say anything. We can’t tell if he’s in pain, if he’s having some other issue, or what. We took him off the insulin, because it looked similar to his insulin shock symptoms. He seems to be doing okay without the insulin, but now I’m worried about this. Argh.

It has been weird having only the one cat, and the (mostly) quiet one at that. It’s been nearly a week since we took Rebo in and had him put down. Both CJ and I keep expecting to see him in one of his accustomed places, or hearing him complaining or just yeowing for whatever reason. Now if Zootie is in trouble, I don’t know what I’ll do … I mean, if it is best for him, yes, I’ll ask the vet to put him down, but I am hoping he’ll go awhile longer. Sigh.

The reason I’ve been home is that it’s the break between quarters. On Monday school starts back up again. I’m having a hard time motivating myself to really focus on the one class (one I’ve never taught before) … I got some work done, but not enough. I still have a bit of time, but still … part of me is annoyed with the rest of me. So here I sit berating myself, but still not accomplishing anything. D’oh. Oh well.

On the plus side, last weekend we went with Gail (Carolyn’s sister), and Gail’s friend Caryl to San Simeon and spent a lot of time at Hearst Castle. I had been there with family many  years ago, but I didn’t remember much of it. The others had never been. We arrived Friday afternoon, went to the hotel in Cambria (a few miles down the road), and got set up, then went up to the Castle for the “Evening Tour” — something they do seasonally, they have actors in 30s costume, and such in some of the rooms, interacting with each other, etc. That was fun. The next day we went back up and did two other tours, seeing most of the castle and rooms. I took a gillion photos (posted over on Facebook). We also got a small amount of beach time. Our hotel was in sight of the water, and we could hear the surf all night, which was nice. It was a good trip. Back on Sunday …

Started watching (via Amazon Prime) The X Files, which has been amusing. Parts of it are not bad, parts are a bit hokey, but it’s just the first season. I have a lot of friends who watched it when it aired, I figure I ought to give it a chance, and since I can watch it as part of my subscription, I might as well …

Well, enough rambling. I feel I ought to try to get something done, but not sure what. (That’s actually the worst feeling …)

We took him in to the vet and had him put down. The poor beast. He was understandably upset at being there again. He was just there yesterday. When it was time for the shots, I had to leave the room. The vet told us what he would do: one shot to calm him down, the second to put him out. CJ held him the whole time. I waited in the waiting room. The place already feels a little empty. We still have his brother, Zootie, but … we will miss Rebo. Sometimes in the stupid ways: walk in the door or around the corner and have him yeow very loudly; etc. It will take some getting used to.

We really expected Zootie would be first to go of the two of them. It goes to show that sometimes you can’t tell. He just took a really bad turn in there, and well, there we are. CJ’s hit pretty hard … I find myself on the verge of tears and then my brain goes off in a different direction again … I’m not hitting the hard core grieving point yet. I’ll get there.

In the meantime, Zootie is still here, and he’ll probably get more attention than he wants for a bit. He’ll just have to deal. Sigh.

Today is a rough day for us. Yesterday I took Rebo back to the vet, because his breathing was really labored. The vet, after checking him out, had him x-rayed and found a lot of fluid in the lungs. They drained over a cup and a half of fluid. He’s breathing better, but the vet was concerned. Zootie has an issue with fluid in the lungs, but he can take a diuretic and that takes care of it (well, most of it anyway, enough that he’s doing okay). However, the vet indicated that combined with Rebo’s hyper-thyroid issues (he has lost nearly half his body weight in the last six months or so), and what appears to be cancer-related fluid in his lungs, that quality of life was very poor, and that he might not live beyond the next few days.

CJ called the vet from work, and talked over things. She made the decision … today we’re taking him in and having him put down. He’s been a sweet cat (annoying, but mostly because of the hyper-tension), and it will be hard. She’s working from home today, because she wants to be in the room when they give him the injection and be with him at the end. 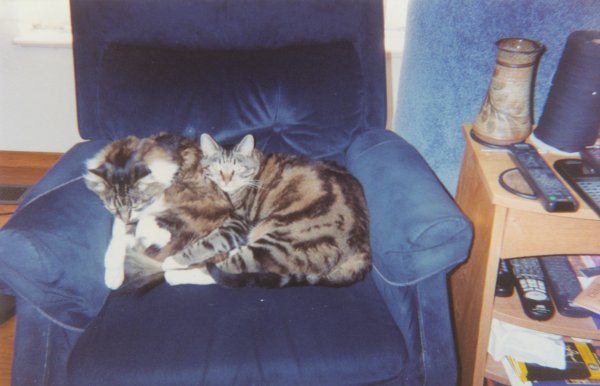 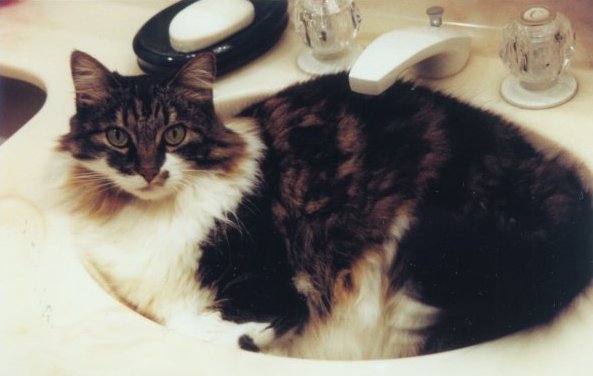 2003, Rebo in the bathroom sink, house in Moraga

Somehow I imagine people may feel that way, anyway … It’s been down for a couple of hours. Amazing how much work one can get done in that time!

The media shelves have been taken care of. The ones I ordered from “Houzz.com” are pretty good. Not a simple assembly, but they worked out, look good, etc. Glad to be done with that project.

Quarter ended a week ago with a small amount of drama (there almost always is these days) — the typical stuff — students panicking because it was Finals Week and some of their grades were not up to snuff, etc. Overall, less drama than I have sometimes gotten.

This next quarter will be a massive challenge:

On other fronts …: Rebo (one of our cats, the long-hair, loud one, with hyper-thyroid) is in decline. He has lost in the last six months about half his body weight (from 12 pounds to 6.5). He looks more like “Bill the Cat” than his old self. CJ is pretty weirded out by this, as we don’t know how long he has. When we went to bed last night she was worried that Rebo wouldn’t be alive this morning. He was, and loud, hungry, etc. as always, but … he’s breathing heavy on top of it all.

CJ’s work is crazy, but that seems to be the norm. It is rare for her to be home at a decent hour (even on days she leaves at the “usual time”, BART is screwed up because a bunch of cars are out of commission, and then you add in the pro sports games, and commute time becomes a living hell some days).

I submitted the first draft of the History of the West Kingdom to go with the SCA’s 50-year celebration and got back some really nice compliments. Have now sent it out to the old-timers that I have email for, and requested that they take a look and make sure I have not skipped anything important, gotten any facts wrong, etc. Of course one of them wants to do a full edit … argh. I didn’t ask for that.

Some of the Kickstarter campaigns I helped fund are close to fruition — looking forward to receiving some of these — some cool technology things, for example …

We’re heading into the fourth year of serious drought in California, it’s not looking good for decent rainfall here. Very difficult to deal with. We’re trying to not flush the toilets unless necessary (an old adage from the last drought: “If it’s yellow, be mellow, if it’s brown, flush it down …”). This means that sometimes the house smells a bit more than I’d like. Bleah. Especially with the heat we’ve been having. October. 90s. Bleah.

The Golden Stag Players (my acting troupe) are doing Twelfth Night (Shakespeare) at … Twelfth Night. This should be fun. My apprentice’s apprentice (well, he’s no longer an apprentice, but I will always think of him as my apprentice) is directing, and he’s the producer now.

Right now am just wasting some time, before I delve back into something big. I have a lot of work to do with the new courses for school. Good thing I still have 1.5 weeks of time to work on them …

This weekend we’re planning on going to San Simeon to see Hearst Castle. Gail, my sister-in-law decided that “dammit” she wanted to do something with family this year (we used to go to Stinson Beach with her family, but after their mother died, that stopped – she was the glue there). I haven’t been since I was VERY young, and CJ and Gail have not been before.